Dungeons and Dragons Tomb of Annihilation 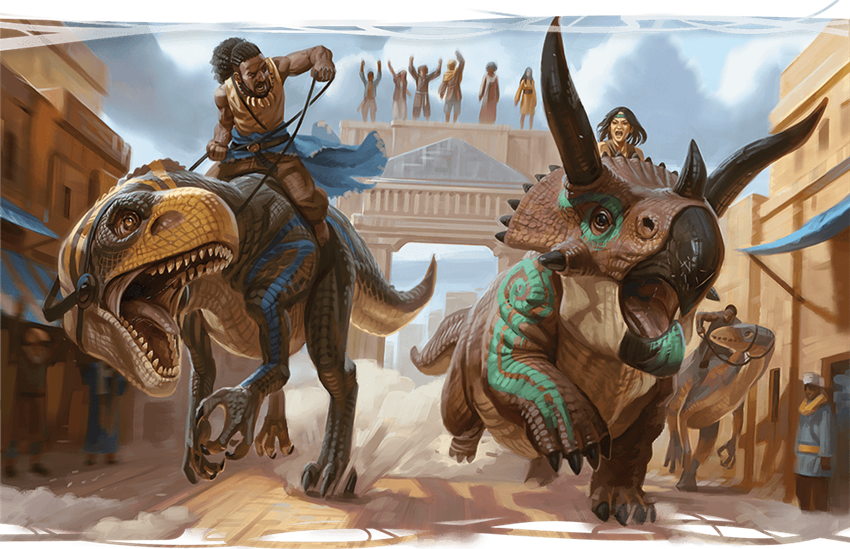 When I was preparing for Port Nyanzaru, in Tomb of Annihilation, I started reading what other Dungeons Masters had to say about the city. A lot of them would mention that the dinosaur race was a must-do, and that if done properly, it could really be a high point in the start of the adventure. The problem was, I felt that the official rules regarding this race were, well, underwhelming, to say the least. Each player rolls a dice, gets some points or not, repeatedly until the end of the race. If that race was going to be something to remember, I felt that I needed to spice it up a bit.

The way I designed the race was as a mix between the official rules, the Game of the Goose and Mario Kart. You win if you are the first to complete 2 full laps around the city. Each lap is made of 48 squares, and starts/finishes at the Coliseum, marked with an X. The players roll initiative to determine the order in which they'll play. We however consider that they all move at the same time, meaning that if 2 dinosaurs cross the finish line during the same round, they'll be considered ex aequo.

A player's turn goes as follows:

I've kept the same dinosaur stats as given in the book, and used the official stats block for the Velociraptor.

Here are the loot boxes that I came up with.

Each player had to pay 20 gold to enter the race. The first finisher gets 100 gold, the second one gets 50 gold and the third one gets 20 gold. The players are obviously free to bet on anything they like, and the DM is responsible for giving them appropriate odds.

I hope these rules will help you run a fun race, or at least give you ideas to create your own set of rules! Feel free to tell me what worked and what didn't if you ran with these!